The Consulate General of France in Atlanta and the Office for Science and Technology are hosting a webinar on Tuesday, December 8, 2020, at 10 a.m. (EST), for the 5th anniversary of the Paris Climate Agreement, featuring Pr. Brian C. Murray, Director of the Duke University Energy Initiative, who will speak on the scientific rationale behind the Paris Agreement and the subsequent public policy mechanism, and Pr. Kim Cobb, Georgia Power Chair, Professor in the School of Earth and Atmospheric Sciences at the Georgia Institute of Technology, who will speak on the role of scientists public engagement in the fight against climate change. The interventions will be followed by Q&A sessions to give participants the opportunity to interact with the speakers. 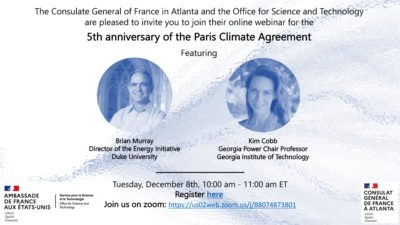