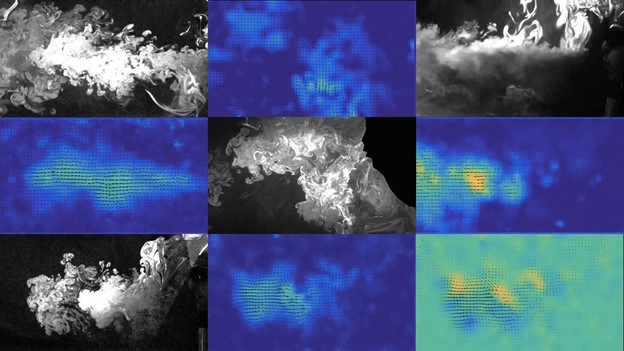 Photo: Researchers filmed the movement of a mist of tiny droplets in front of a person. Credit: Princeton University

Medical reports and various sources of information suggest that the flows created during breathing, speaking, laughing, singing or exercising could be the means by which asymptomatic people contribute to the spread of the SARS-CoV-2 virus.

Manouk Abkarian, from the Center for Structural Biochemistry, CNRS UMR 5048-INSERM UMR 1054, and Simon Mendez, from the Institut Montpelliérain Alexander Grothendieck, CNRS, two laboratories at the University of Montpellier, have teamed up with Howard A. Stone and two of his colleagues from the Department of Mechanics and Aerospace Engineering at Princeton University to quantify, based on experiments and numerical simulations, the way in which exhaled air is transported by speech.

Their work was published in PNAS on September 25, 2020. In particular, they demonstrate that phonetic characteristics introduce complexity to the airflow dynamics and plosive sounds, such as “P,” produce intense vortical structures that behave like “puffs” and rapidly reach 1 m. However, speech, corresponding to a train of such puffs, creates a conical, turbulent, jet-like flow and easily produces directed transport over 2 m in 30 s of conversation.

This work will contribute to thinking about the role of ventilation, aerosol transport in disease transmission for humans and other animals, and yield a better understanding of linguistic aerodynamics, i.e., aerophonetics. They should serve as a basis for public health orientations for risk reduction and strategies to mitigate the transmission of pathogens in the air.