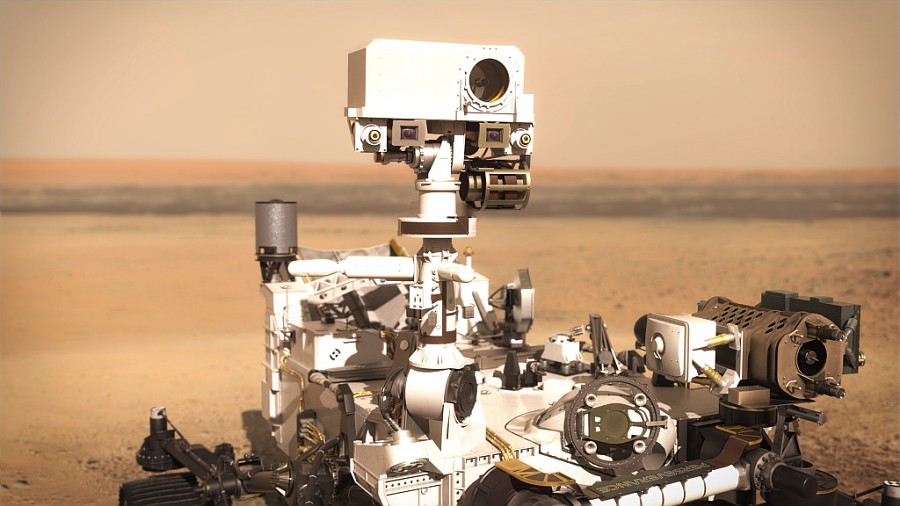 Following the landing of NASA’s Perseverance Mars rover in Jezero Crater on 18 February, the first telemetry received by teams at the French Operations Centre for Science and Exploration (FOCSE) at CNES’s Toulouse Space Centre confirm the mission’s SuperCam instrument is in excellent health.

Following the landing of NASA’s Perseverance Mars rover in Jezero Crater on 18 February, the first telemetry received by teams at the French Operations Centre for Science and Exploration (FOCSE) at CNES’s Toulouse Space Centre confirm the mission’s SuperCam instrument is in excellent health.

Perched atop the rover’s mast or ‘head’, SuperCam is currently undergoing a series of tests to check out all of its systems. This commissioning phase is scheduled to last three months, but the data SuperCam’s engineers and scientists are seeing already show it is in great shape.

SuperCam is the mission’s ‘Swiss Army knife’, capable of performing five different types of analysis to study Mars’ geology and help choose samples for collection by the rover. Data from the instrument show that everything is nominal:

The LIBS spectrometer analyses the light flash of the plasma formed when SuperCam’s infrared laser zaps a target to determine the chemical make-up of rocks—i.e., their atomic composition—from up to seven metres away. This is the same technique used by the Curiosity rover’s ChemCam instrument for more than eight years now. The first LIBS spectra acquired by SuperCam on this first science target is excellent quality. By matching these spectra to those obtained by ChemCam, the science team will be able to compare the chemistry at two different places on the planet.

The Raman spectrometer uses a green laser beam to analyse rocks’ mineral composition. It is able to precisely characterize the molecular structure of minerals from up to seven metres from the rover, as well as detect certain organic molecules. “This is the first time an instrument has used Raman spectroscopy anywhere other than on Earth!” says Olivier Beyssac, CNRS research director at the IMPMC mineralogy, materials physics and cosmochemistry institute. “Raman spectroscopy is going to play a crucial role in characterizing minerals to gain deeper insight into the geological conditions under which they formed and to detect potential organic and mineral molecules that might have been formed by living organisms.”

The visible and infrared (VISIR) spectrometer will analyse sunlight reflected from Mars’ surface. This technique, already widely used for remote sensing from orbit, makes it possible to study the mineral content of Martian rocks, in particular how they could have evolved in the presence of water, as well as to analyse the make-up of the planet’s atmosphere. SuperCam is the first instrument to use the technique on the surface of Mars. The first spectrum acquired on Maaz is very good quality. Used in combination with LIBS, which is able to remove dust from rock surfaces, VISIR spectrometry is set to acquire data eagerly awaited by the Mars science community.

The colour camera takes high-resolution pictures to provide geological context for targets and thus assist interpretation of biochemical and mineral analyses. The first images received have the expected quality and resolution, indicating that the imager is in perfect working order.

The science microphone records the popping sound made when the LIBS laser zaps a rock from up to four metres away. This sound made when the plasma forms reveals information about the rock’s physical properties. The microphone is also able to record wind noises and the sounds of the rover itself. “The sounds acquired are remarkable quality,” says Naomi Murdoch, a research scientist and lecturer at the ISAE-SUPAERO aerospace engineering school. “It’s incredible to think that we’re going to do science with the first sounds ever recorded on the surface of Mars!”

Choreographed by NASA’s Jet Propulsion Laboratory (JPL) in Pasadena, California, operations are ongoing at the Mars 2020 FOCSE at CNES, where the French team is sharing the workload with the Los Alamos National Laboratory (LANL), New Mexico. Every other day, the French science and engineering teams send instrument commands to their U.S. counterparts, who are working on Mars time to bring this marvel of technology to life. “We’re applying a lot of the lessons learned from operating ChemCam to what we’re doing now with our U.S. counterparts,” notes Gabriel Pont, SuperCam Operations Manager at the Mars 2020 FOCSE. “Things are going smoothly and at a very good pace despite COVID-19 social distancing restrictions.”

After this first phase checking out the instruments’ health, NASA and JPL will continue putting Perseverance and its Ingenuity helicopter through their paces for at least the next two months. Once checkout is complete, Perseverance will begin its science mission in earnest. At the FOCSE, scientists from numerous CNRS and partner research laboratories and operations engineers at CNES are gearing up for this next phase that will run for several years.

The Mars 2020 mission was developed by NASA’s Jet Propulsion Laboratory (JPL/Caltech). SuperCam was developed jointly by the Los Alamos National Laboratory (LANL) and a consortium of French research laboratories attached to the national scientific research centre CNRS and to French universities and research bodies. Several Spanish universities, led by the University of Valladolid, are also contributing to this instrument. CNES has overall responsibility to NASA for the French contribution to SuperCam.