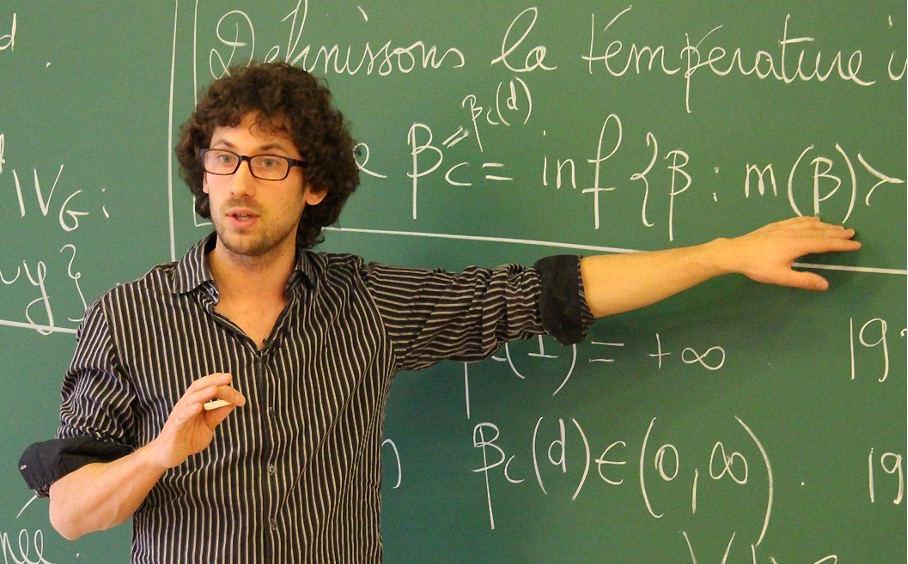 Honored for his work in probabilistic mathematics applied to models of interacting particles, Hugo Duminil-Copin received the quadrennial mathematics prize on June 5, 2022.

Awarded to mathematicians under 40 years of age, the Fields Medal is the most prestigious award in the discipline. The French mathematician is the winner in 2022 for his probabilistic work on the Ising model in statistical physics. This model helps explain ferromagnetism, which is the mechanism by which a material can behave like a magnet or be attracted to one. This behavior depends on the temperature, and the continuity of the magnetization of the material is a central question in the field. Indeed, there may be discontinuities due to a change of state of the material.
Hugo Duminil-Copin succeeded, with his peers Michael Aizenman and Vladas Sidoravicius, in proving that in dimension three, the Ising model presents a continuous phase transition, a long-standing problem in this branch of statistical physics. This has opened up several new research directions according to the Fields Medal jury.

Hugo Duminil-Copin is an agrégé professor of mathematics at the Ecole Normale Supérieure Ulm and a graduate of the Université Paris-Saclay. He is a professor at the Faculty of Sciences of the University of Geneva, where he completed his doctoral thesis under the supervision of Stanislas Smirnov, winner of the 2010 Fields Medal, as well as a permanent professor at the Institut des hautes études scientifiques (IHES).

France, ranked behind the United States (15) in volume of Fields Medals, receives its 13th medal and retains its world rank as the second most awarded nation. The United States, South Korea, Ukraine and the United Kingdom are co-recipients of the prize, with June Huh, Maryna Viazovska and James Maynard receiving the award respectively.