Portrait of a French scientist 4/5: Meeting with Nausica Arnoult, Biologist at the University of Colorado Boulder

Nausica Arnoult is a molecular biologist; she set up the Arnoult Lab in 2018 at the University of Colorado, Boulder.

Nausica Arnoult, head of a new laboratory that describes the cellular machinery of DNA… 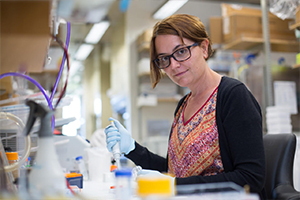 With her growing team, she is interested in the repair of DNA breaks and the biology of telomeres. She explains: “Our DNA is constantly being damaged and broken, and is fortunately repaired by different cellular machinery. My lab studies how these breaks are repaired. This research allows us to explore themes related to cancer. Indeed, before becoming cancerous, tumour cells have accumulated numerous mutations. Most often, tumours are accompanied by mutations in the DNA repair pathways,” she adds. By manipulating DNA repair mechanisms, it is possible to prevent DNA repair in cancer cells, thereby leading to their destruction. A better understanding of the different DNA repair pathways allows the optimization of chemotherapies that target these mechanisms or induce damage, as well as the identification of new therapeutic targets. Research in this field is evolving very rapidly and is expanding, thanks in particular to a range of new techniques developed in recent years. Among them are genome editing techniques. Indeed, “DNA manipulation by Crispr-Cas9 – a “molecular scissors” technique – involves inducing DNA breakage in a controlled manner and using cellular repair mechanisms to modify a gene. In order to better control this technique and make it more effective, it is essential to better understand and possibly influence the type of repair used by the cell”. Thus, the fundamental research in her laboratory is helping to nurture new hopes for curing certain cancers and genetic diseases. } 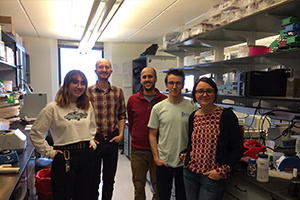 In addition, her laboratory is also interested in telomeres: “They are structures that protect the ends of chromosomes and maintain cellular balance during aging: by forcing older cells to stop dividing, telomeres induce cellular aging but prevent the development of cancers. The second role of telomeres is to prevent the cell from confusing the ends of chromosomes with DNA breaks, thus preventing the fusion of different chromosomes, which would lead to significant damage. Her laboratory is therefore conducting research projects to explain how telomeres inhibit DNA repair mechanisms. This cutting-edge research, in a particularly competitive scientific environment, deserves to be highlighted for its excellence and for the determination shown by researchers pursuing such a career.

In 2000, while Nausica Arnoult was a DEUG student (ex-Bachelor in France) in Evry (91), the international Human Genome Project consortium sequenced the first human genome. France, and more precisely the Centre National de Séquençage d’Évry, was in charge of the sequence of chromosome 14. She recalls with great enthusiasm: “My job as a student was to launch the evening sequencing runs (e.g. analyses). I proudly participated in the sequencing of the first human genome. It was undoubtedly an activity that opened up vocations. Later, in 2009, Elizabeth Blackburn received the Nobel Prize in Medicine and Physiology for the discovery of telomerase. Nausica Arnoult comments: “It is the enzyme that lengthens telomeres in stem cells but also in most cancer cells. At the time, I was doing my thesis at the Institut Curie on telomere replication, and Elizabeth Blackburn was there for a few months. I had the great pleasure of discussing my thesis project with this exceptional scientist. Nausica Arnoult points out that she did not grow up with scientists, neither in her family nor in her entourage. Nevertheless, she says, and it seems that this is one of the main keys: “I have always had a very Cartesian and curious mind. It is not surprising that I decided, as a high school student, to go into scientific research. Moreover, the university environment has always been familiar to me, since my father was a technician at a university. I spent my nursery school years there, many Wednesday afternoons and my first summer jobs. As a student, I felt at home at the university, and that certainly encouraged me to pursue an academic career. 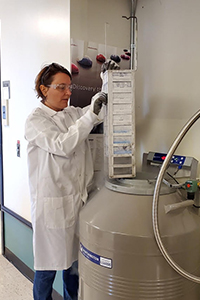 As for the American adventure, it began at the end of my bachelor’s degree as I went to Standord University (California) for a summer internship: “I remained impressed by the American laboratories, and I had really enjoyed life in California. She adds that during her PhD, she was fascinated by the research work of a specific team in San Diego. However, her desire to go abroad took a little longer: “I was very keen to join this team for a post-doctorate. But I had a baby at the end of my thesis, and was scared of expatriation to the other side of the world with a newborn baby. So I first spent a few years in Belgium and waited until my son was 3 years old to join the Salk Institute in San Diego for a post-doctorate”. This achievement is a fine demonstration that mobility is possible with a good dose of curiosity, will and determination. If she was planning to return to Europe after this experience, she emphasizes that this return was too complicated to organize: “There were very few open positions, the conditions were not as good as in the United States. In the end, I was more familiar with the American system. Several advantages appealed to me: on the one hand, project funding are allocated for 5 years as opposed to 2-3 years in France. Although they are difficult to obtain, researchers spend less time writing long funding applications. On the other hand, there are more “independent” positions for scientists. After 8 years of post-docs (the duration of post-docs varies and can last up to 10 years), I really wanted to have my own independent team “. When her decision to stay in the US was made, she applied all over the country to open her own lab (this usually takes a year), before deciding to join the University of Colorado, Boulder, in 2018. Finally, Nausica Arnoult encourages mobility, collaborations and exchanges between scientists because “research is always better when they come together”.

Role models and presence of parity encourage the younger ones

When it comes to diversity, “the question arises, of course,” says Nausica Arnoult. She points out that diversity, in terms of either gender, ethnicity or culture, generates creativity. “Science is better when it is done by scientists from diverse backgrounds. The more you are representative of this diversity, the more you attract it”. For example, “it is more likely that a woman will pursue a scientific and academic career if she sees many women scientists in her department, at conferences, etc”. In her view, “it is also a question of justice. In biology, half of the students, PhDs and post-docs are women, but there is an important glass ceiling in management positions: laboratory, unit or institute management. There is no reason for that”. She says that she has been “lucky” to choose a particularly feminized field of research and notes that in her field in particular, the biggest names in telomere research are women: Barbara McClintock (Nobel Prize 1983), Élizabeth Blackburn (Nobel Prize 2009), Titia de Lange (Breaktrhough Prize 2013). These women have been role models for her. She also states that, more generally, many teams working on telomeres are led by women and, at international conferences, more than half of the speakers are women. At the Curie Institute, most of the research units were also headed by women. Thus, “the question of being a woman never arose. Pursuing an academic career as a woman seemed completely natural. It was only later that I realized how different the situation was for many of my female colleagues, for whom it was not always easy to establish themselves as women. Research institutes and university departments have a role to play. In the United States, they have taken stock of the situation in recent years, and all are now trying to recruit equal numbers of men and women and to increase diversity. Today, however, she observes: “Many of my female colleges are dropping out of the academic career because finding an independent position – which usually takes a year and a lot of energy – often coincides with motherhood. The job search, the pressure and travel involved are difficult to reconcile with having young children. She continues: “My advice for young people (girls) is to follow their true passions, and not let themselves be influenced by the pre-dictated and gendered roles that are still at work today. Finally, later in their careers, young women should trust their abilities to become scientists, including the ability to impose a better work-life balance.