The United States joins the Space for Climate Observatory 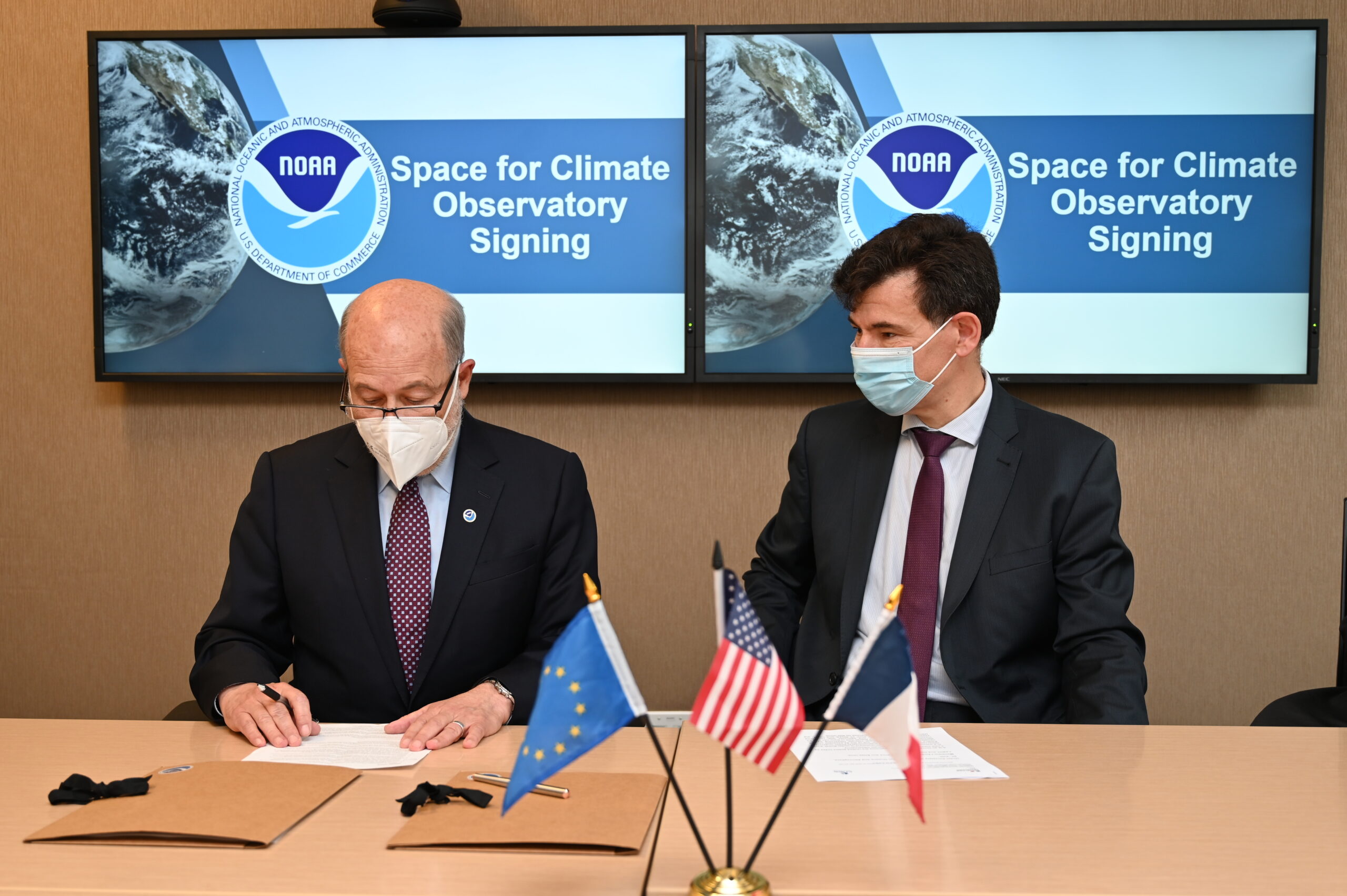 This week, the United States joined the Space for Climate Observatory (SCO) initiative, fulfilling the commitment made by Vice President Kamala Harris

This week, the United States joined the Space for Climate Observatory (SCO) initiative, fulfilling the commitment made by Vice President Kamala Harris during her November 2021 visit to France. Richard Spinrad, Ph.D., Under Secretary of Commerce for Oceans and Atmosphere and Administrator of the U.S. National Oceanic and Atmospheric Administration (NOAA) signed the SCO Charter as the lead agency for the United States. He was joined for the signing ceremony by Philippe Étienne, the French ambassador to the United States; Philippe Baptiste, Ph.D., Chairman and CEO of the French National Center for Space Studies (CNES), along with representatives of NOAA and the U.S. National Aeronautics and Space Administration (NASA).

The Space for Climate Observatory is an initiative of the One Planet Summit under the leadership of CNES to combine satellite and in situ data with scientific research to model and track climate change and its impacts at global-to-local scales. It is also working to establish indicators and decision-support tools in a coordinated and cross-disciplinary fashion, including with social and economic sciences, to enhance the global community’s collective ability to mitigate the impacts of climate change.

“The United States, represented by NOAA, strongly supports the establishment of the Space for Climate Observatory, and we are pleased to be among the first signatories of its Charter. We look forward to working with our federal and international partners, including CNES, to turn Earth observations into actionable information to help governments and communities combat the climate crisis and adapt to our changing world,” said NOAA Administrator Rick Spinrad, Ph.D.

Together with the Department of Commerce, NOAA is a key part of President Biden’s whole-of-government response to tackling the climate crisis and bolstering sustainable economic development. NOAA’s climate observations, science, and decision-making tools—everything from greenhouse gas measurements to sea level rise projections—are used in communities in the U.S. and around the world to keep people safe during extreme weather, drive business decisions for industries like agriculture and transportation, and help build infrastructure for the future. NOAA is committed to helping the world respond to climate change through its mission of delivering climate science, service, and stewardship.

“Space is unique for observing our planet. Space technology allows us to measure with great precision many climate variables that are essential to understand and adapt to climate change. By conceiving methodologies that combine various data sources to provide scenarios for action, the SCO aims to become an important tool for decision-making on preparedness, adaptation and resilience to the impacts of climate change at local level. The joining of the United States in the initiative is a new step in its development”, said Philippe Baptiste, Chairman and CEO of CNES.