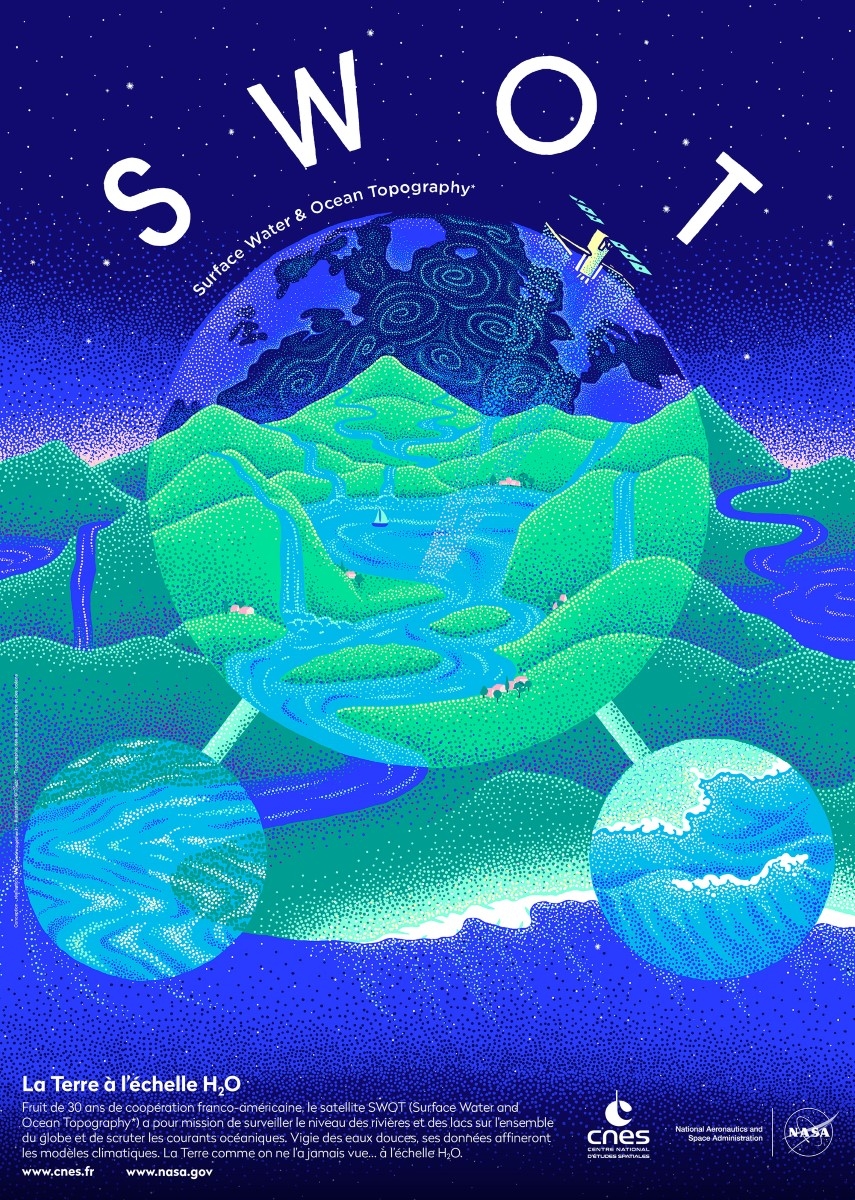 Friday 16 December, the SWOT satellite (Surface Water and Ocean Topography) was sent into orbit atop a Falcon 9 vehicle operated by SpaceX from Vandenberg Space Force Base in California.

Friday 16 December, the SWOT satellite (Surface Water and Ocean Topography) was sent into orbit atop a Falcon 9 vehicle operated by SpaceX from Vandenberg Space Force Base in California.

SWOT is a joint mission between CNES and NASA, with contributions from the Canadian Space Agency (CSA) and the UK Space Agency (UKSA), dedicated to measuring surface water levels in lakes and rivers and river discharges, and to acquiring highly precise and detailed data on ocean dynamics. It is the first space mission to survey almost all of Earth’s surface water. This scientific adventure in the field of altimetry began 30 years ago, in 1992, with the launch of the TOPEX/Poseidon satellite and was subsequently pursued through the Jason series in partnership with the U.S. National Oceanic and Atmospheric Administration (NOAA) and Eumetsat.

SWOT is designed around a key leap-ahead wide-swath interferometry technology with the KaRIn instrument conceived by the Jet Propulsion Laboratory (JPL), for which CNES and Thales Alenia Space built the radiofrequency system. KaRIn has two Ka-band synthetic aperture radar (SAR) antennas separated by a 10-metre boom that will enable it to view a 120-kilometre swath with a horizontal resolution on the order of 50 to 100 metres. SWOT will also be carrying a Nadir module comprising the same instruments as the Jason series of satellites, including the Poseidon dual-frequency altimeter built by Thales Alenia Space. This module will carry the DORIS precise orbit determination system, built by Thales, an Advanced Microwave Radiometer (AMR), a GPS Payload (GPSP) and a Laser Retro-reflector Array (LRA) built by JPL.

In 2023 the SWOT satellite will extend the coverage of oceanographic altimetry to coastal currents and hydrology, measuring surface water heights to gauge and track river discharges and freshwater stocks around the globe. In the field of oceanography, with a resolution ten times better than current technologies it will enable fine-scale observations spanning 10 to 20 kilometres of ocean circulation structures and their interactions with the deep ocean. This will in turn help us better understand their effects on marine life, ecosystems, water quality and energy transfers. And SWOT’s radar interferometer will afford the ability to survey coasts up close and study their interactions with ecosystems, water quality and shoreline retreat.

From a broad perspective, by gauging sea level and river and lake discharges and levels with greater precision, and by studying coasts closely, SWOT will help us to manage Earth’s freshwater stocks more sustainably. Data from the satellite are set to bring new insights into rising sea level and how coasts are evolving in a changing climate, delivering vital information to numerous scientific communities around the world.

Commenting on the successful launch, CNES Chairman & CEO Philippe Baptiste said: “France is once again heading into space alongside the United States, contributing its world-renowned science and engineering expertise. A new chapter in the cooperation between our two nations is opening, building on a legacy of more than 30 years in the field of Earth observation. I would like to congratulate and thank all of the teams who made this success possible. We can now look forward to next summer when we’ll start working with the first data delivered by SWOT.”