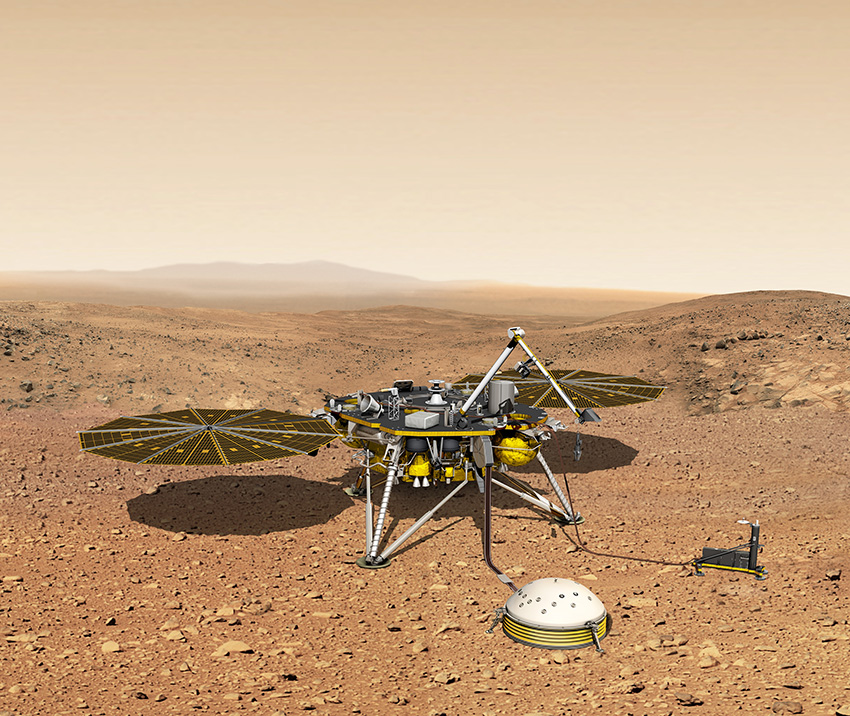 NASA has extended its InSight mission on Mars for two years, running through December 2022, with a high level of funding from NASA and from CNES for the French (SEIS seismometer) and international contributions it is coordinating.

InSight is the first mission dedicated to looking deep beneath the Martian surface. Among its science tools are a seismometer for detecting ‘marsquakes’ and the APSS weather station composed of sensors for gauging wind, temperature and air pressure, and a magnetometer. The first two years of the mission have cast Mars in a new light, revealing a living planet with seismic activity, dust devils and strange magnetic pulses.

A dust storm has been encircling the red planet for several months now, greatly restricting the flow of power to InSight and the SEIS and APSS instruments. Operations teams at CNES and NASA have so far succeeded in keeping most of the seismic and meteorological sensors switched on, even intermittently, enabling them to continue sending back very good science data and even recently detecting new quakes. CNES is operating the SEIS and APSS instruments from the FOCSE-SISMOC* centre at its Toulouse Space Centre, while the data centre at the IPGP Earth physics institute in Paris (Paris University/IPGP/CNRS) is in charge of distributing data to the scientific community.

As night falls on Mars, the tether connecting SEIS to InSight has a tendency to generate thermoelastic cracking and popping sounds in the seismic data when the temperature drops sharply at this time of the day. At the initiative of IPGP and CNES, for the extended mission this tether will be buried under a layer of Martian regolith using the scoop at the end of InSight’s Instrument Deployment Arm (IDA). This will considerably improve the quality of the seismic signal from SEIS by attenuating the effects of temperature swings on Mars.

Besides seismic measurements, InSight’s APSS instrument is providing some of the most detailed meteorological data ever collected on Mars and with the Curiosity rover already on the planet’s surface and the Perseverance rover set to land in February will constitute the first meteorological network on another planet.

Science data from the first Martian year or sol (two Earth years) and published scientific papers are freely available for download from the SEIS website (https://www.seis-insight.eu/fr/science/seis-accueil).

About InSight and SEIS

** In collaboration with Sodern for the VBB sensors, JPL, the Swiss Federal Institute of Technology (ETH Zurich) and the Max Planck Institute for Solar System Research (MPS, Göttingen, Germany), and Imperial College London and Oxford University, which supplied subsystems for SEIS and are involved in exploiting the mission’s science data.