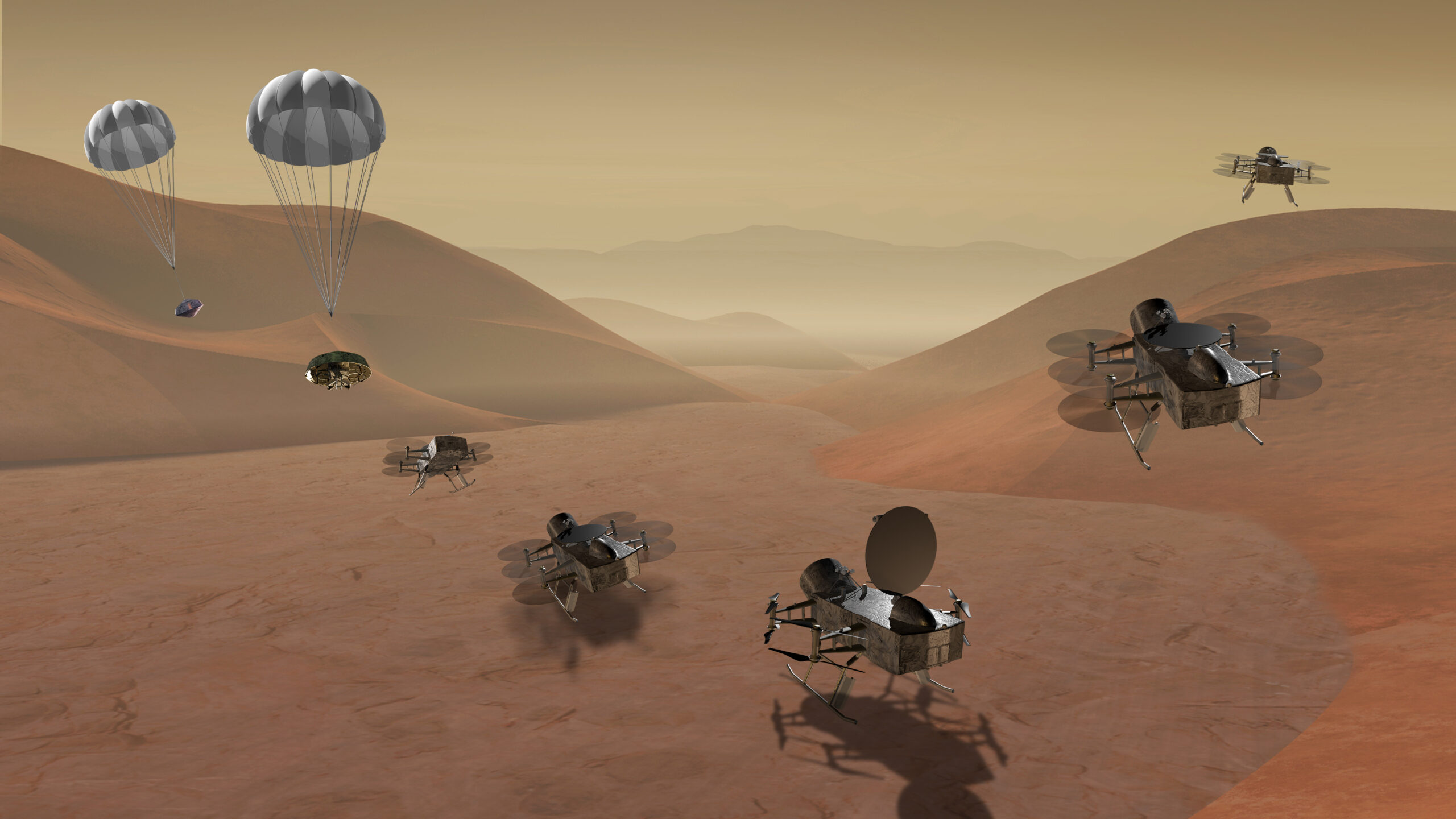 Earlier this year, CNES and NASA signed a cooperation agreement on Dragonfly mission to explore Titan.

Earlier this year, CNES and NASA signed a cooperation agreement on Dragonfly, the fourth mission in the US space agency’s New Frontiers programme to explore the solar system. Dragonfly is scheduled to launch in 2027 and land and begin operations in 2034. The core of the mission is a rotorcraft lander weighing a few hundred kilograms designed to investigate at least a dozen different geologic settings on the surface of Titan, Saturn’s largest moon. The mission’s nominal lifetime is two and a half years. The main French contribution, led by the LATMOS atmospheres, environments and space observations laboratory (CNRS/University of Versailles Saint-Quentin-en-Yvelines – Paris Saclay/Sorbonne University) (1) , concerns the design and construction of DraMS-GC, a gas chromatograph that is part of the DraMS (Dragonfly Mass Spectrometer) instrument suite that will perform chemical analysis by laser desorption mass spectrometry (LDMS) or gas chromatography mass spectrometry (GCMS). These two modes of analysis are intended to look for and identify a broad palette of organic compounds and potential biosignatures in atmosphere and surface samples. Involvement of French scientists (2) in the team for the DraGMet instrument (Dragonfly Geophysics and Meteorology Package) is also planned.

From 2004 to 2017, the Cassini-Huygens space mission’s exploration of the Saturnian system revealed the once enigmatic moon Titan as a world of great interest to scientists, with terrain and chemistry similar in many ways to our Earth. Titan’s atmosphere and its carbon and nitrogen chemistry underlying diverse complex organic molecules make it an ideal planetary-scale laboratory. But this chemistry that could also have the potential to produce chemical species key to life remains largely shrouded in mystery.

The Dragonfly mission aims to unveil these secrets and much more besides. Its rotorcraft will land autonomously in the Shangri-La dune field near the Selk impact crater to explore this region that might harbour key chemical ingredients for life.

The Dragonfly mission’s science goals will be met chiefly through surface measurements, but it will also perform certain programmatic and scientific measurements in flight.

In addition to the DraGMet and DraMS instruments, Dragonfly’s payload includes DraGNS (Dragonfly Gamma-ray and Neutron Spectrometer) and DragonCam (Dragonfly Camera Suite) for science and navigation.

France will be supplying the DraMS-GC subsystem, two helium tanks and chemical reactant devices for DraMS.

The DraMS-GC module consists of two injection traps and two chromatography capillary columns. The traps concentrate molecules from samples heated in the pyrolysis oven. The columns are capable of separating volatile molecules released from the traps so that they can be identified individually in the mass spectrometer. The two columns proposed will provide complementary capabilities for separating compounds of interest, while also offering a certain amount of overlap to ensure redundancy.

CNES is providing oversight, with responsibility for supplying certain key components—like for example a set of 16 microvalves manufactured by Air Liquide Advanced Technologies—and a large team of experts working on the project.

French research scientists are contributing their scientific expertise to the DraGMet instrument.

(2) From LATMOS and the IPGP Earth physics institute in Paris.