Mars 2020 mission launch: Perseverance rover and its SuperCam instrument safely on their way to Mars 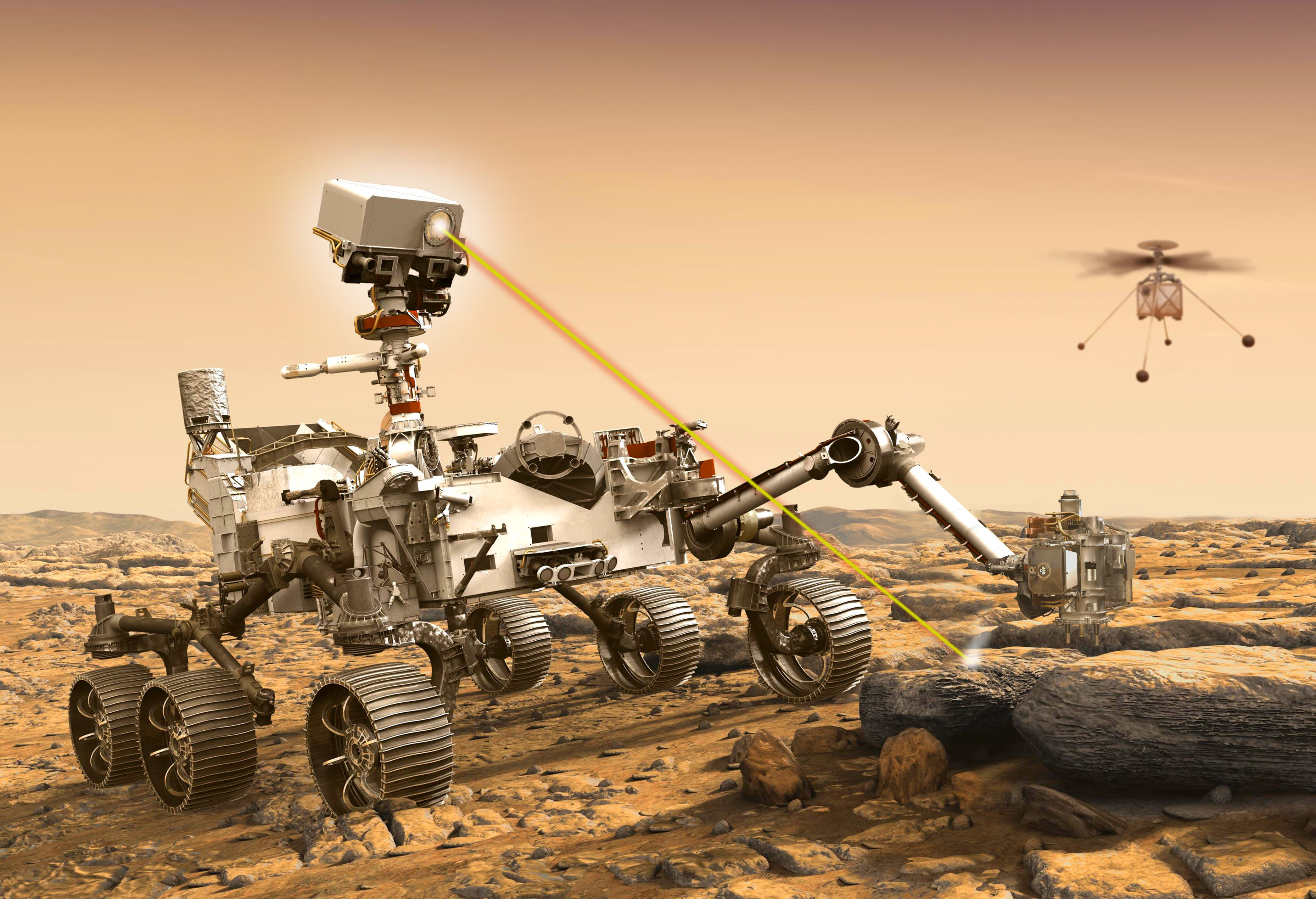 Thursday 30 July, the Mars 2020 mission successfully lifted off from Cape Canaveral in Florida atop an Atlas V launcher.

Thursday 30 July, the Mars 2020 mission successfully lifted off from Cape Canaveral in Florida atop an Atlas V launcher. For the Perseverance rover carrying the French-U.S. SuperCam instrument, the long voyage to the red planet has begun. The mission is scheduled to land on Mars on 18 February 2021.

Some four billion years ago, Earth and Mars shared many more similarities than they do today, with dense atmospheres, liquid water and large-scale magnetic fields. So, the fundamental question taxing the minds of exobiologists is: if life developed on Earth during this epoch, could a form of life also have emerged on Mars?

Perseverance will explore ancient environments on Mars to probe its geological record and better characterize its past habitability. It will search for signs of past life by detecting any biosignatures that might be present. Its mission is also to pave the way for future human exploration of the red planet. The rover is designed to collect and cache samples for later retrieval and return to Earth by the joint U.S-European Mars Sample Return (MSR) missions within the next 10 years.

Perseverance is carrying seven instruments and a sample collection and caching system. It will also set down an experimental helicopter called Ingenuity on the surface of the red planet. France’s contribution is SuperCam, a next-generation version of the ChemCam instrument already operating on the Curiosity rover since 6 August 2012.

SuperCam will survey the chemistry and mineralogy of Martian rocks and soil, as well as the composition of the planet’s atmosphere. It is the mission science team’s ’Swiss Army knife’, capable of performing five different types of analysis: measurement of elemental chemical composition, two kinds of molecular measurements (bonding and arrangement of molecules within minerals), an imager to acquire pictures of targets for analysis and a microphone. SuperCam features a number of complex subsystems, including a power laser built in France. The instrument will aid scientists in their search for fossilized signs of past microbial life on the red planet.

On 18 February 2021, Perseverance will set down in Jezero Crater, an impact crater 45 kilometres wide. The crater is home to an ancient river delta that flowed 3½ billion years ago into a lake. This lake-delta system offers the prospect of collecting samples of a varied range of rocks and minerals, in particular carbonates, which can preserve fossil traces of past life.

President Jean-Yves Le Gall commented: “France is en route to Mars again with its prime partner the United States. The tasks that Perseverance is set to undertake will build on the discoveries made by previous Mars missions, giving us greater insights into our history, environment and future prospects. I would like once more to thank everyone involved in this fine mission, as well as NASA for the renewed faith they show CNES year after year, mission after mission. We shall now look forward to the landing on Mars on 18 February 2021. A new chapter in Mars exploration is being written and CNES is along for the ride.”

CNRS Chairman & CEO Antoine Petit added: “This successful start to the long voyage to Mars has been a really poignant moment shared by all the people involved in this science project and by the public, who are as excited as ever about our research. Thanks to NASA and CNES, the scientists at CNRS and our partners are going back to the red planet with a renewed ambition. Perseverance, a first step towards the return of Mars samples to Earth in the 2030s, is first and foremost a great international human adventure that only science and the quest for knowledge can offer us.”

The Mars 2020 mission was developed by NASA’s Jet Propulsion Laboratory (JPL/Caltech). SuperCam was developed jointly by the Los Alamos National Laboratory (LANL) and a consortium of French research laboratories with the IRAP astrophysics and planetology research institute (CNRS/CNES/Paul Sabatier Toulouse III University) in Toulouse, France, as science lead, with a contribution from the University of Valladolid, Spain. CNES is the contracting authority for the French contribution to SuperCam. CNES, the French scientific research centre CNRS and numerous universities provided human resources for the construction of the instrument. The French SuperCam team will be involved daily in science operations and the instrument will be operated alternately from LANL and the Mars 2020 French Operations Centre for Science and Exploration (FOCSE) at CNES’s field centre in Toulouse.