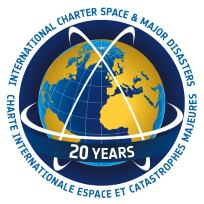 Initiated by CNES and ESA, joined shortly thereafter by CSA (Canadian Space Agency), the founding act of the International Charter Space and Major Disasters was signed on 20 October 2000 and it was declared operational on 1 November the same year.

Initiated by CNES and ESA, joined shortly thereafter by CSA (Canadian Space Agency), the founding act of the International Charter Space and Major Disasters was signed on 20 October 2000 and it was declared operational on 1 November the same year. This unique example of successful international cooperation today combines and coordinates the Earth-observation expertise and resources of its 17 member space agencies. The charter aims to respond to requests from emergency management agencies in affected nations, local authorities, civil protection agencies and the United Nations, for which it provides satellite imagery of disaster zones free of charge through priority tasking of more than 60 satellites to get information as quickly as possible to relief teams on the ground. France’s SPOT and Pleiades satellites are the spearhead of this initiative, having proved their responsiveness and agility. In recent years, some 40% of disaster maps have been generated from Pleiades data.

Since entering service, the charter has operated 24/7 and been activated 680 times (as of 19 October 2020, when it sprang into action for flooding in Vietnam) in 126 countries. About half of these activations have been in response to floods or submersion of coastal areas, the other half in the aftermath of storms, cyclones, earthquakes, fires, volcanic eruptions, landslides, oil spills and even industrial accidents like the explosions in Beirut on 5 August 2020.

Thanks to the universal access principle adopted in 2012, more than 60 nations have the ability to directly send charter activation requests as authorized users. At the same time, the charter is providing training for new user nations. UNITAR/UNOSAT and UNOOSA can submit requests for assistance on behalf of unauthorized users. The charter has also signed an agreement with Sentinel Asia, a regional emergency response network providing Earth-observation satellite data to 28 countries in Southeast Asia. Consequently, every country in the world now has access to the charter’s services.

Governance of the charter is assured on a rotating basis by its member agencies. France has chaired the charter six times since its inception, its latest term running from October 2018 to April 2019.

In France, charter activations are triggered by the civil protection agency in tandem with the Interministerial Crisis Management Operations Centre (COGIC). The SERTIT regional image processing and remote sensing service is the French operator that produces rapid maps of disaster-affected areas at CNES’s request from 70-cm-resolution Pleiades satellite data. It processes satellite imagery in such a way that maps are readily usable by institutions and emergency services coordinating disaster response. This service was activated during the recent Storm Alex, which left a trail of destruction in the Alpes-Maritimes region, supplying disaster maps of the Vésubie and Roya valleys as early as 5 October.

Pleiades is a French very-high-resolution Earth-imaging satellite system capable of acquiring sub-metric imagery of any point on the globe in under 24 hours. Consisting of two satellites in the same 694-kilometre orbit, the constellation delivers dual-use imagery to civil and military users.
In addition to its great agility, Pleiades’ key asset is an extremely sensitive optical instrument that reduces the exposure time needed for each image, giving each satellite the ability to acquire up to 1,500 images a day.
As prime contractor for the Pleiades system, CNES contracted with Airbus Defence & Space to build the satellites and with Thales Alenia Space for the optical instrument. In Europe, programme partners Austria, Belgium, Spain and Sweden were also involved in satellite construction.