Portrait of a French scientist 3/5: Meeting with Joceline Lega, mathematician at the University of Arizona – Tucson, Arizona

Joceline Lega is a Professor of Mathematics, and more specifically Applied Mathematics at the University of Arizona (UArizona). 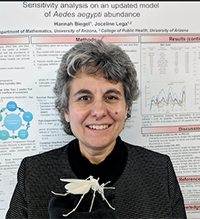 She is passionate about scientific discovery, sharing knowledge, transdisciplinarityy and elegant mathematical applications. With her collaborators, she seeks to explain physical and biological phenomena through mathematics! Joceline Lega’s curiosity for how real-world phenomena work leads her to develop new mathematical models that help explain them better. “For example, consider the coronavirus epidemic in China, or the cruise ship that docked in Japan. It would be useful to be able to describe in advance, with some degree of precision, the number of cases that will be recorded, or the number of new cases that are likely to occur each day. If the transmission of the virus spreads locally, or spreads more globally, will public health systems be ready to treat all affected patients? If it comes to closing schools, when would it be best to make such a decision? Mathematical models help to explore different scenarios to address these questions. It is important to understand how these models, which often have many parameters, work so that we know how to combine them with data collected in real time to produce realistic and useful predictions.” Her passion has allowed her to work with researchers in fluid dynamics, optics, neuroscience, geoscience, biology, and most recently in public health. “I am now interested, with students and colleagues from various departments, in establishing the usefulness of some simple non-linear models to predict the number of influenza cases in the US, modeling the effect of climate on the presence of mosquitoes (which can transmit certain diseases), and understanding how the movement of people affects the globalization of the disease.”

A language with distant origins and evolving applications

Applied mathematics has distant origins. Joceline Lega reminds us “from time immemorial, humanity has tried to understand the world; mathematics offers a language and a structure to develop such an understanding of the real world”. Biology and applied mathematics have recently become much closer. Over the past century, it explains by the fact that biology has gradually ceased to be solely descriptive and has become a post-Galilean, quantitative, predictive science… The explosion of data production has thus enabled mathematical biology to develop over the last thirty years for many applications. Nevertheless, among these developments in applied mathematics, Joceline Lega observes a trend that she considers alarming, which is to reduce the subject to the sole use of mathematical tools to solve specific problems. “It is important to see the field of applied mathematics as an area of research that develops mathematical results, in a context inspired by applications.” She adds that another aspect of her own research is “more theoretical and consists of understanding the role of certain non-linear phenomena in partial differential equations or discrete dynamical systems.”

Collaboration as a driver of mobility to the United States 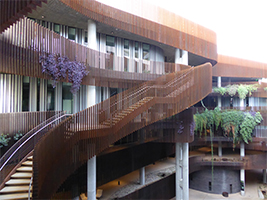 From Nice, Joceline Lega did her studies in France: preparatory classes in Nice, École Normale Supérieure in Paris, then a DEA (ex-Master) and her thesis in Nice in Theoretical Physics. “After my thesis in 1989, I obtained a position at the CNRS (French National Center for Scientific Research), at the Nice Sophia-Antipolis Non-Linear Institute. At the time I was already collaborating with different research groups in different countries, including Arizona. In 1997, I applied for and received a secondment from the CNRS to take a position as Assistant Professor at the University of Arizona. I stayed in Arizona and became an Associate Professor in 2000 and Professor in 2006”. Joceline Lega is also affiliated with the Faculty of Public Health and coordinates the postdoctoral program in mathematics. She has also been awarded the title of Fellow in 2017 by the American Association for the Advancement of Science, the world’s largest general scientific society, whose goals are to promote cooperation among scientists, defend scientific freedom, encourage scientific responsibility, support education and the popularization of science. This distinction is a further demonstration of the researcher’s unfailing curiosity. This curiosity manifested itself early on. As a child, Joceline Lega was fascinated by physical anthropology and dreamed of one day working for the CNRS as an anthropologist! “My aunt was a mathematician and my parents always encouraged me to go as far as possible in my studies, so that I would have a choice when it came to making decisions for the future”. The move to Arizona came later when the opportunity arose. “What attracted me to the University of Arizona is that it’s very easy to collaborate with experts in other disciplines ; American universities have very large campuses where science, humanities, medicine, and engineering converge – whereas in France the subjects are often separated and distant with the humanities campus in one part of the city, social sciences in another, medicine elsewhere, etc. Given my interest in mathematical modeling, having the opportunity to discover new areas and to contribute to research answers in these fields, all on site, is a considerable advantage. That said, the value of interdisciplinary or even transdisciplinary research is much better appreciated nowadays, in France and elsewhere”.Joceline Lega pursues many collaborations. “My recent publications focus on influenza prediction, mosquito abundance, and real-time prediction of chikungunya cases in the 2014-15 epidemic in the Caribbean”. Her most recent collaboration is with the International Lab (UMI) iGlobes in Tucson, Arizona. This research center, created to establish a hub of collaborative interactions between the French scientific community and UArizona researchers, promotes innovative interdisciplinary research on environmental challenges. It is with great enthusiasm that she indicates that she will soon be supervising, with a Parisian colleague, a French intern on the modelling of the propagation of chikungunya in Puerto Rico! iGlobes is a structure that allows the hosting of French interns at the University of Arizona – do not hesitate to contact the organization for more information.Joceline Lega’s career path demonstrates the possibility of establishing strong collaborations between France and the United States; according to her, “one must not be afraid to change one’s habits and be willing to discover new cultures, whether in the United States or elsewhere”.

The importance of diversity, encouragement and perseverance

What can women do for applied mathematics, for science? Again, curiosity underlies Joceline Lega’s answer. She reminds us that we must not forget that very often “in science and elsewhere, real progress takes place by going off the beaten track”. Diversity, including gender diversity, is a positive factor in the evolution of science. In the article Diversity Matters, available on her web site and blog, she presents various elements that underline this need. The world of mathematics is known to be predominantly male, and there are proportionally very few female researchers in Joceline Lega’s department. However, she continued to point out that one of the difficulties encountered in the professional world is the apprehension by others of women’s reactions. Joceline Lega explains: “This difficulty was very well evoked by Fiona Hill during her testimony before the American Congress; when a woman is angry, it is easy to say that emotions are what govern her behaviour, and that there is therefore no reason to assume that there is a real problem, whereas a similar complaint from a man in the same professional context would immediately be taken seriously”. With optimism, Joceline Lega observes that attitudes are changing. The education system is also changing: “For many generations, success meant that you were able to follow a path and adopt a prescribed behaviour. Either one succeeded or one gave up, there was no real intermediate option”. She says the definition of success has changed: “The emphasis is now on the person whose goal is to succeed; if someone has a variety of interests, needs more time, or prefers to follow a different path, there is no reason for all doors to close. As educators, we must welcome diversity with open arms, not only because everyone has the right to an effective education, but also because a diverse and well-educated society is much better able to face the challenges ahead”.Joceline Lega was guided by a vocation: “I focused on what I wanted to do”. Having said that, she says with smiling look: “My aunt and godmother, Josette Guiu-Roux guided and advised me a lot when I made the decision to go to higher education. On the other hand, Josiane Serre, who was Director of the École Normale Supérieure when I finished my thesis, encouraged me to pursue a career as a researcher”. Encouragement is precious, and everyone has a role to play in encouraging young people and especially women to embark on scientific careers. “The question of education cannot be solved in a few words. I remember that my father always told me not to always believe what people say (e.g. “it’s too difficult to do maths or physics”, or “everybody fails the exam, so there’s no point in trying”…), that everybody is different, and that it is important to form one’s own judgement based on one’s own experience”. The bottom line: “Don’t be afraid to explore options and choose the career you want; don’t let others tell you what career you want or need; and don’t be afraid to persevere”.