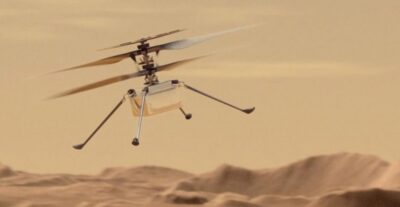 Perseverance was parked 80 metres from the small rotorcraft, which rose to five metres and then hovered before flying downrange for 133 metres and returning to its take-off and landing spot. SuperCam’s science microphone, developed by ISAE-SUPAERO, recorded the sound from the helicopter’s whirring rotors during the flight. The sound registered 84 hertz, equivalent to a low E note on the piano or a bass voice type.

“This is a wonderful surprise for the science team!” said Naomi Murdoch, a research scientist with ISAE-SUPAERO who is studying the data captured by the microphone. “Testing in a Mars atmosphere simulator to design this instrument and our sound propagation theories led us to believe the microphone would find it very difficult to discern sounds from the helicopter. As Mars’ atmosphere is very tenuous, it really attenuates sounds. So we needed a bit of luck to pick up the helicopter from this range. We’re thrilled to have obtained this recording, which is going to be a gold mine for our understanding of the planet’s atmosphere.”

Developed jointly by ISAE-SUPAERO and a consortium of laboratories attached to the French national scientific research centre CNRS and partner laboratories, coordinated by CNES, SuperCam’s microphone is derived from a consumer model adapted to withstand the Martian environment. The microphone is pursuing three science and technology goals of the Mars 2020 mission:

⦁    Study the sounds generated by laser impacts on Martian rocks to better understand their surface mechanical properties.
⦁    Seek to gain new insights into surface atmospheric phenomena such as wind turbulence, dust devils and wind interactions with the rover, and now with the helicopter.
⦁    Analyse the sound signature of the rover’s movements, for example when it is using its robot arm, driving on flat or rugged terrain, and operating its pumps.

The microphone was first turned on a few hours after Perseverance’s landing, picking up the first sounds on Mars from atmospheric turbulence. It is used daily in combination with laser-induced breakdown spectroscopy (LIBS) to analyse the chemical make-up of Martian rocks.

The Mars 2020 mission was developed by NASA’s Jet Propulsion Laboratory (JPL/Caltech). SuperCam was developed jointly by the Los Alamos National Laboratory (LANL) and a consortium of French research laboratories attached to the French national scientific research centre CNRS and to French universities and research bodies. Several Spanish universities, led by the University of Valladolid, are also contributing to this instrument. CNES has overall responsibility to NASA for the French contribution to SuperCam. The instrument is operated alternately from LANL and the Mars 2020 French Operations Centre for Science and Exploration (FOCSE) at CNES’s field centre in Toulouse. The microphone operating sequences for the Ingenuity flight were tasked from FOCSE.