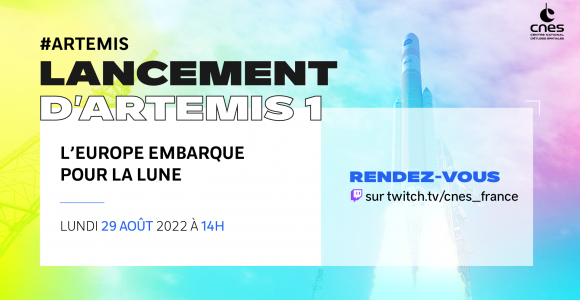 Monday 29 August at 2:39 p.m. (CEST, 8:39 a.m. EST), the SLS heavy-lift launcher will lift off from Kennedy Space Center (KSC) in the United States. CNES experts will be taking part in a Twitch livestream to provide commentary on the launch and analyse the Artemis programme’s ambitions, airing from 2:00 p.m. (CEST, 8;00 a.m. EST).

Discover or rediscover Artemis on CNES’s Twitch channel—twitch.tv/cnes_france—in a livestream event* detailing the programme’s science goals, highlighting the French science and engineering community’s contribution to this lunar mission—through the ESM module—and engaging the viewing public with live pictures of the launch from KSC.
* In French only

France signed up to the Artemis Accords on 7 June and is now working alongside 20 other nations on this international space exploration programme led by the United States. While the United States and France are already longstanding and successful partners in space, this signature strengthens their shared ambition to pursue crewed and robotic space exploration programmes. This policy statement sets out principles that will guide the peaceful exploration of space through the Artemis programme. In particular, it reaffirms the importance of the universal framework created by the 1967 Outer Space Treaty and the attachment to establishing international rules and regulations through an inclusive multilateral approach.

The Artemis Accords offer a wealth of opportunities for industry and scientific research in France and Europe. French firms in the space sector are already actively contributing to the Artemis programme. France’s signature thus seeks to extend and deepen such mutually beneficial partnerships.

It will also provide the opportunity to continue advocating international coordination to enhance governance of the peaceful exploration of space, in particular under the aegis of the United Nations Committee on the Peaceful Uses of Outer Space (COPUOS), the only multilateral forum able to provide the right framework as set out in the Artemis Accords. This new partnership thus ties in with France’s space diplomacy efforts, which are strongly attached to promoting international cooperation in civil science and technology with all spacefaring nations.